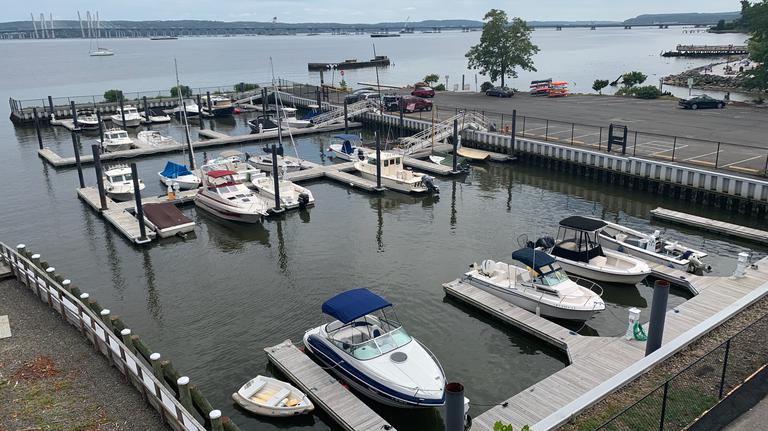 The Nyack Marina is a Village owned and operated public marina that’s located on the western shore of the Hudson River, bordered by Burd Street to the north and the inlet separating the marina from Memorial Park to the south. The marina was privately owned until the Village acquired the site in 1997, it was previously known as Peterson’s Marina.

Nyack’s marina and waterfront areas have played an important role in Village’s development dating back to the nineteenth century—first as a navigational center for a burgeoning stone quarry industry, then as a transportation hub carrying passengers and freight between Nyack and Westchester and New York City prior to the construction of the original Tappan Zee Bridge. Nyack has at various times had thriving boat-building and commercial fishing industries before its waterfront activities became primarily recreational.

After a period of decline, the Nyack Marina was revitalized in the wake of Superstorm Sandy back in 2012, when much of the marina was damaged or destroyed. Thanks to a $2.5 million FEMA grant, the Village was able to reopen a completely renovated marina in 2016, with new seawalls, bulkheads, and walkways; new docks and slips for seasonal renters; and new security fencing and lighting. All the slips have been outfitted with new electric and water services, and the Village was able dredge the marina basin to accommodate boats up to 27 feet in length.

Today, the Nyack Marina can accommodate 43 boats; slips are available to Nyack residents and non-residents alike. The marina also has a municipal launch ramp, with permits for either daily or seasonal use, as well as a new a storage rack for kayaks that can be rented on a seasonal basis.

Improvements to the marina are ongoing. The Village has demolished the deteriorating waterfront restaurant within the marina, and is soliciting ideas from restaurants and marina operators for new plans for the site that will revitalize the Nyack waterfront. In addition, improvements are being made to maximize parking and improve the surfacing of the parking areas. Another major project was completed in Fall 2020 is the construction of a pedestrian bridge over the inlet that connects the marina to Memorial Park.  A Waterfront Committee within the Nyack Parks Commission has been convened to help develop a longer-term plan for additional improvements and activities that will improve access to, and the use of, all of Nyack’s waterfront resources, including the Nyack Marina.